The Rebirth of Mozambique's Natural Treasure

The Rebirth of Mozambique's Natural Treasure

In 1962, six-year-old Vasco Galante was treated to his first cinema trip - to see Charlton Heston in the Hollywood epic, The Ten Commandments.

But despite the blockbuster's eye-popping sequences, the images that most impressed young Vasco came from a short advert shown before the film, which showcased the elephants, lions and buffalo in the verdant floodplains of Gorongosa National Park - a Mozambican safari paradise once marketed as "the place where Noah left his Ark".

As he left the Lisbon picture house, young Vasco vowed to visit the park one day, and more than 40 years later, he finally got the chance.

But the park he encountered was a far cry from the Gorongosa of '60s showreels that once attracted the likes of John Wayne, Joan Crawford and Gregory Peck.

A brutal 15-year civil war in the aftermath of Mozambique's independence from Portugal in 1975 had devastated much of the province, and Gorongosa, one of its key battle grounds, was almost destroyed. 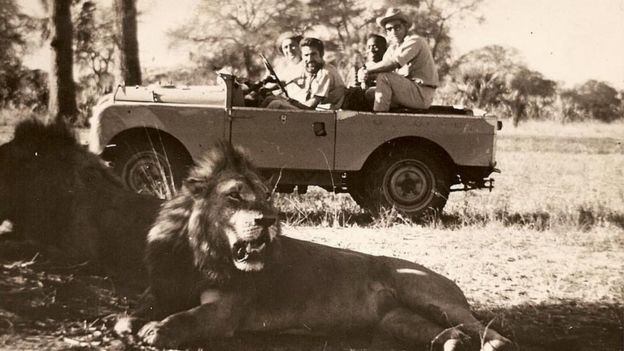 Photo: In the 1960s, Gorongosa was advertised as a showpiece for former Portuguese East Africa © Gorongosa National Park 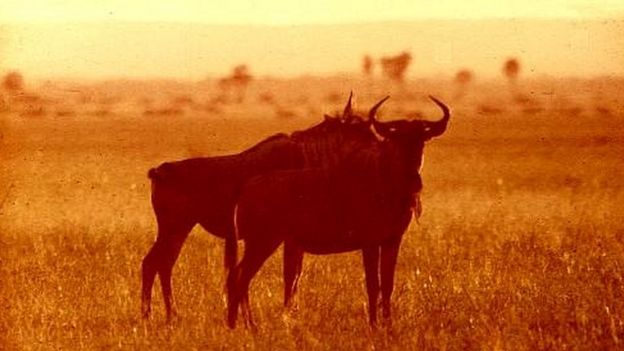 Photo: Filmstars and tourists alike flocked to see the wildlife in the park © Antonio Jorge 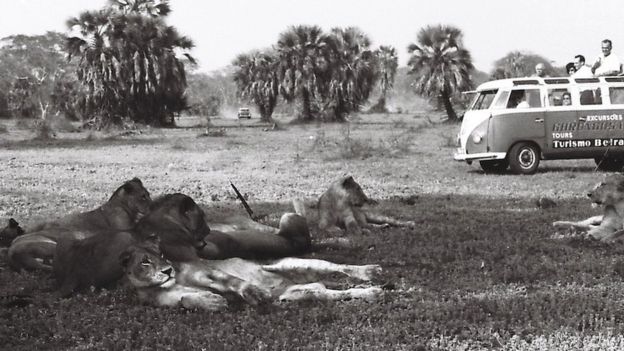 Photo: But the park was largely destroyed during a 15-year civil war © Gorongosa National Park

During the war, rebel forces from the Mozambican National Resistance (Renamo), made the foothills of Mount Gorongosa their home, and through a combination of hunting and environmental vandalism, managed to annihilate 90% of the large animal population.

Local poaching compounded the problem, and by the time Vasco arrived in 2005, "you could drive all day long and not encounter any wildlife," he says. Chitengo, the park's main campsite, had been reduced to rubble.

Gorongosa's predicament was in many ways indicative of the state of Mozambique's tourist industry, which had once been a significant part of the country's economy.

Despite more than 2,700 kilometres of coral-fringed coastline, abundant natural beauty, rich cultural heritage, and its proximity to South Africa, one of the world's top tourist destinations, Mozambique was making far less money from international visitors than neighbours such as Zimbabwe and Zambia.

Years of armed conflict scared off holidaymakers, and vital infrastructure such as cross-country roads and train lines had been all-but destroyed.

Labyrinthine visa processes and the relative paucity of tour operators certainly didn't help matters, but most importantly, investment in tourism was desperately low.

Today, Vasco is the communications director of a newly restored Gorongosa, which is once again making a name for itself as a premier safari destination, while acting as a model for many of Mozambique's long-neglected attractions.

The restoration project, which began in 1994 with the help of the African Development Bank, is spearheaded by 56-year-old Greg Carr, an ebullient tech entrepreneur-turned-philanthropist from Idaho Falls in the US who made his fortune at an early age, and was looking for a venture to which, as he puts it, he could devote the rest of his life.

Mr Carr visited Mozambique in 2004, at the invitation of the country's ambassador to New York, at a time when the country was "the single poorest nation on earth," he says.

Photo: Wild buffaloes and other animals have been re-introduced to the park © Getty Images

"I asked myself the question - what can Mozambique do for economic development, how can it compete in a world economy, how can it create good jobs?," Mr Carr recounts, as he relaxes in Gorongosa's modern reception lounge.

"And I said, well why doesn't Mozambique have a multi-billion-dollar tourism industry like other African countries, Kenya or Tanzania."

The same question was being asked by the Frelimo government, who in 2000 identified the country's nascent tourism industry as one of the sectors with the highest potential to ease unemployment.

With the help of bodies like the World Bank, private sector partners were courted for specific sustainable tourism projects, and regulatory reforms such as the creation of designated "tourism development zones" were pushed through.

Mr Carr was shown around Gorongosa, and, a few years later, signed a public-private partnership with the Mozambique government to run the park for the next two decades.

The park also attracted the support of the US, Portuguese and Irish governments, universities including Harvard and Princeton, as well as many sub-Saharan African businesses and tourism operators.

One-by-one, species were reintroduced to the plains. Buffalo, wildebeest, eland, elephant and hippo populations began to rise, and even the lions returned in moderate numbers, although some predators, such as leopards, seem to have been obliterated for good.

Documentary teams from around the globe, including the BBC's, and wildlife experts, began to take note. The renowned American biologist EO Wilson took a shine to the park - famously branding it "ecologically the most diverse park in the world" due to the scale of its insect life. Gorongosa's on-site laboratory now bears his name.

The hope, Mr Carr says, is that all this publicity will help the park to eventually pay for itself, through a combination of tourism, agricultural projects and a thriving local economy.

Indeed, the local economy is vital to the park's success. The 200,000 people who live around Gorongosa are among the poorest in the country, and lack the most basic provisions.

Some were initially hostile to the restoration project, which ring-fenced land previously used by local farmers, and by poachers.

But Mr Carr says he has always seen Gorongosa as a "combined human development and conservation" effort.

"We probably spend as much time outside the park as inside the park," he says, constructing schools, hospitals and water sources, and helping with farming.

Photo: Vasco Galante fell in love with Gorongosa because of a cinema advert he saw as a six year old.

One new initiative is a coffee farm in Mount Gorongosa's rainforest, where the locals used to cut down 500-year old trees to plant corn or beans, with limited success. Now, hundreds of people are involved in growing Arabica coffee beans, which will wind their way into cafes next year.

Many locals now work in the park, such as 21-year-old Domingas Aleixo, who grew up just a few kilometres away, and was destined to work on the land like most other women in the community.

Now she is a part of the lion conservation project at Gorongosa, working with world-renowned experts, while also studying for her animal biology degree in Portugal.

"I didn't know the importance of bio-diversity," she says, but these days she helps educate the community on how to deal with and preserve the local environment, and, along with many other Gorongosa employees in the region, is trying to foster a sense of pride in the extraordinary natural resource on their doorstep. 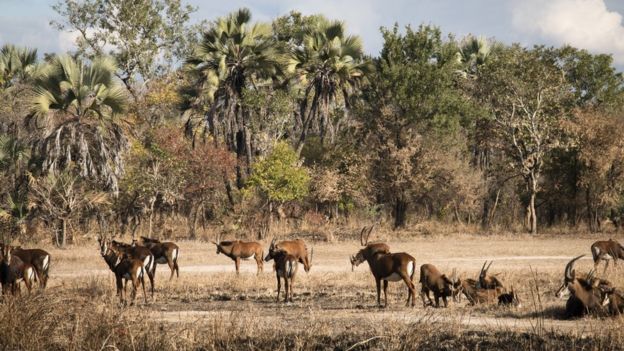 Photo: Wildlife is returning to the park - like this group of sable antelopes © Thinkstock

Photo: Reedbucks are also once again living in the park © Thinkstock

Photo: Warthogs are yet another species which has returned to Gorongosa © Thinkstock

However, despite such successes, Gorongosa is still some distance from its former glories.

Currently, tourism accounts for less than 1% of the park's income, despite the arrival of a luxury hotel brand, and the occasional celebrity visits.

Miles of badly paved roads on the approach to the park which have been neglected by the local authority, and occasional outbreaks of violence in the area further threaten to deter holidaymakers.

However, in 2013 and 2014, because of civil conflict in central Mozambique and travel warnings issued by several embassies and travel sites, the number of international visitors dropped dramatically.

Yet the future of for Mozambique's multiple attractions looks bright.

Last year, the total income from tourism-related activity in Mozambique exceeded $1.1bn, and some 700,000 were directly or indirectly employed in travel or tourism jobs.

Photo: "Here you can see the best of Africa," says Vasco Galante © Thinkstock

Furthermore, the World Travel & Tourism Council estimates that the sector will grow by more than 6% each year over the next decade - well above the global average.

For the infectiously positive Vasco, it's the landscape and wildlife - which so captivated him back in a Portuguese cinema decades ago - that holds the key to Mozambique's resurgence as a holiday destination of choice.

"Here," he says, reclining at the side of a roaring fire in Gorongosa's luxury campsite, "you can see the best of Africa".