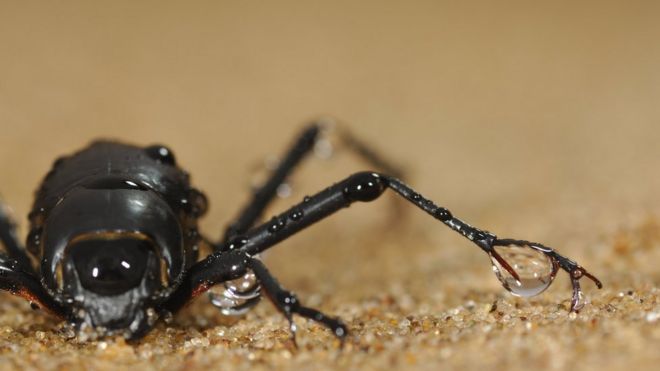 Scientists have drawn inspiration from the bumpy shells of Namib beetles to improve the collection and transport of water droplets.

Combined with other plant techniques, the team created drops that grew larger as temperatures increased.

The authors say the development could significantly improve water harvesting and electricity generation.

A little drop of water may seem insignificant but the physical processes involved in both the formation and movement of the liquid are essential to operation of thermal power plants, desalination and air conditioning systems.

Condensation is also critical to the more fundamental function of gathering water for human use in dry climates, a growing, global issue.

Researchers have made previous attempts to mimic the remarkable abilities of the Namib beetle, which uses its bumpy shell to draw all the water it needs from periodic, foggy winds in the desert.

The assumption until now has been that the surface chemistry of the beetle's back has been the key - but this new study says that it's actually the physical arrangement and location of the bumps that's critical.

The researchers also aped cactus spines by building their bumpy surface to guide the transport of the harvested drops. The slippery coating of pitcher plants inspired the team to coat the bumps with a smooth lubricant to reduce friction as the drops moved.

According to the study, drops grew six times more quickly on this surface and it was able to collect and transport a much larger volume of water in a short time compared to other materials.

"We experimentally found that the geometry of bumps alone could facilitate condensation," said Kyoo-Chul Park, a postdoctoral researcher and the first author of the paper. 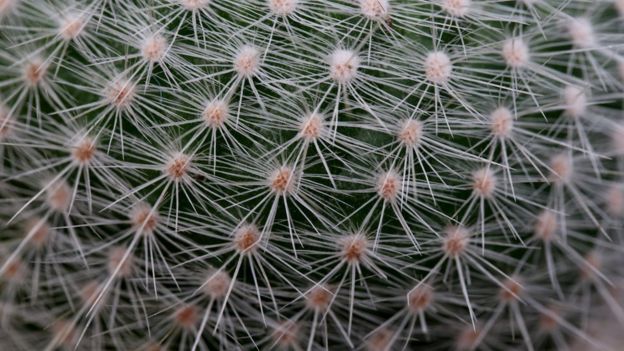 "By optimising that bump shape through detailed theoretical modelling and combining it with the asymmetry of cactus spines and the nearly friction-free coatings of pitcher plants, we were able to design a material that can collect and transport a greater volume of water in a short time compared to other surfaces."

The researchers say that although the expectation is that larger droplets would form on colder surfaces, the experiment showed that the opposite effect with bigger drops at higher temperatures. This could be of crucial benefit in hot, dry environments where water droplets often evaporate before they are collected.

"This design could help speed up that process and even allow for operation at a higher temperature, significantly improving the overall energy efficiency."