The last two remaining wild mountain chicken frogs living on Montserrat have been reunited, and are hoped to begin breeding on the Caribbean island for the first time since 2009.

Last month, a project took the last female and relocated her into the territory of the remaining male as part of a 20-year recovery plan for the species, one of the world’s largest and rarest frogs that exists on just two Caribbean islands, Montserrat and Dominica.

The two frogs are the island’s only known survivors of an outbreak of the deadly chytrid fungus disease, a pandemic ravaging amphibian populations worldwide. There are less than 100 left in the wild. 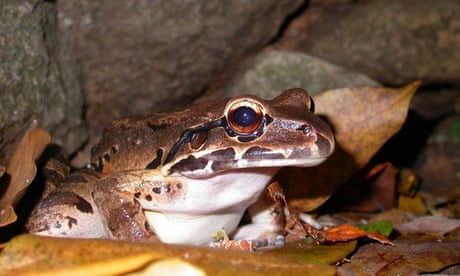 The frogs were living 700m apart among the boulders of a steep, fast-flowing stream in the rainforest at a site known as Fairy Walk. The male had been heard calling for several weeks but after 10 nights of hour-long hikes to the site, the team of conservationists was getting worried that they hadn’t found the female.

Eventually one of the local field workers spotted her. “She was just sat there at the side of the stream, it was absolutely amazing and such a relief,” said Jeff Dawson, amphibian programme manager for the Durrell Wildlife Conservation Trust and coordinator of the mountain chicken recovery programme, which also involves ZSL, Chester zoo, Nordens Ark in Sweden and local governments.

The female was then caught, weighed and measured, and checked for general health, before being taken to the male’s location downstream and placed in a “soft release” tent to give her time to get used to the new environment. The male joined her about an hour later, and the sides of the tent were gradually opened to allow them to move out in their own time. “When we left left you could hear contact calls which was really encouraging,” Dawson said.

Zoologists and camera traps will continue to monitor the frogs in coming weeks, as one of the fears is that the female will try to return to her former site. But Dawson said the abundance of natural and artificial nest holes, a constant water supply and plenty of food meant they were unlikely to move.

The frogs now have until the end of August to breed. “Knowing when is going to be tricky,” said Dawson. “As far as I’m aware, breeding by this species has never been observed in the wild in Montserrat before. Unless we see them mating we won’t know until next year when there will be juveniles.” 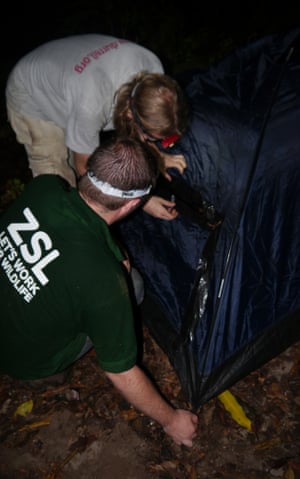 The frogs have a unique breeding mechanism. They use a burrow during mating and after fertilisation the female creates a foam nest in which she lays 10-80 eggs. The tadpoles are fed on unfertilised eggs and develop in the foam, which is protected by a skin that forms on the surface.

There is a high degree of shared parental care, where both will nest on the eggs and aggressively defend the burrow against intruders. Within six to eight weeks, the tadpoles will have changed into froglets.

“These two frogs now have a chance of breeding, whereas if we’d left them where they were the poor male would just be sat there calling every night with no one to hear him,” Dawson said. “If they do breed that would be brilliant and a fantastic, good news ray of light for the recovery programme.”

Dawson said however that this stage was just a small component within a much wider, long-term research programme across Dominica and Montserrat.

As the island’s only two known survivors of the chytrid outbreak, which devastated Dominica’s population in 2002 and reduced numbers from of tens of thousands to around 200 when it reached Montserrat in 2009, the two frogs have also been swabbed to see whether they may have any genetic resistance.

“This is important for conservation efforts because if these frogs do have some type of resistance to the disease which is heritable, then the offspring may inherit that,” Dawson said.

Next year the team will look at establishing semi-wild enclosures populated with captive-bred animals where they will trial environmental manipulation to try to help frogs survive in the wild with the disease.

Chytridiomycosis, described by scientists as “the worst infectious disease ever recorded among vertebrates,” has so far infected more than 600 amphibian species globally, causing population declines, extirpations or extinctions in more than 200 species. It spreads via spores and affects the skin of amphibians — through which many drink and breathe — leading to cardiac arrest.

“We’ve followed this species from its crash and everything we’ve learned will all help inform the next stage of its recovery,” Dawson said. “In wider terms, studying these frogs and the slow recovery of the population on Dominica which was thought to be extinct is really important for understanding how amphibian populations can bounce back from this disease.”